As a quality engineer I responsible for testing various parts of a product. One of such part can be the web UI. But before your first UI test will be executed you will need to configure a lot of things. It might be a non-trivial task. Kubernetes can be quite helpful here and be actual "one ring to rule them all".

Let's consider a typical setup of UI testing with Jenkins as a CI system:

You can run selenium in a standalone mode on your machine but that setup has some disadvantages. For example it's quite problematically to have installed several versions of a browser. Docker brings a significant improvement into web UI testing. Now you can have various images with required browser versions. Besides, containers don't persist the state. It means every test session starts in the same conditions and doesn't affect on next ones.

Nowadays more and more routines are adopted to be run in Kubernetes and various CI systems are not an exception. I've already mentioned Jenkins here so let's continue talk about that automation server. Jenkins has kubernetes plugin that dynamically spawns agents in a kubernetes cluster. This approach may give us some new ideas about how to run tests. As you may know kubernetes operates pods. Think of it as a group of containers with some shared resources such as network and mounts. So let's combine all pieces together: 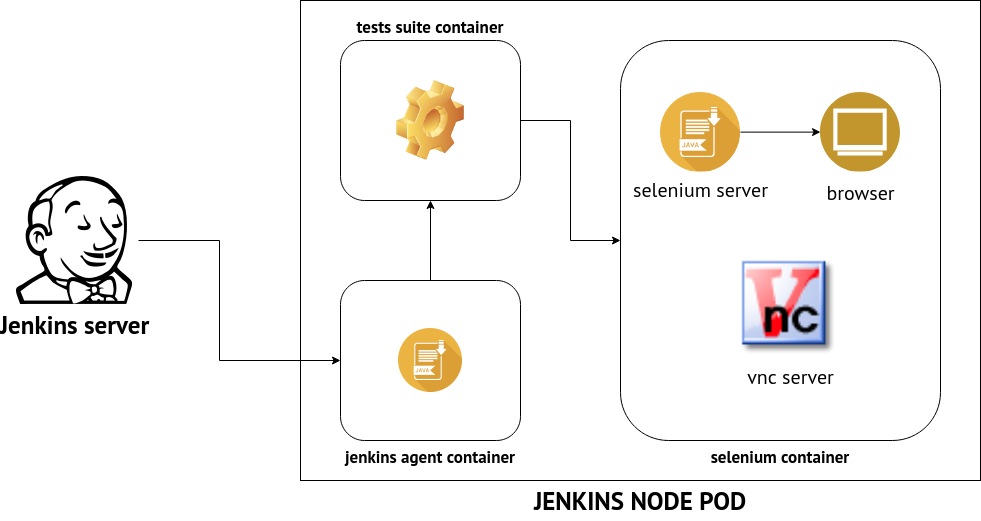 We can describe this setup in a podTemplate of jenkins job DSL:

or via more familiar YAML:

Jenkins Kubernetes plugin and this pod configuration can be in some way an alternative of Selenium Grid. There is a one notable moment about Jenkins jobs. They can be parallelized across multiple Jenkins nodes. In that case each node will have its own selenium instance.

As you may see Kubernetes and containers are game changers. They give you more room to maneuver. In this post I described one possible scenario of the usage but there are other attempts to adapt Selenium to run in Kubernetes such as Moon, Zalenium and Callisto.