Debugging is an essential part of programming. I guess you can agree with me that it takes significant amount of time. Using an appropriate tool can save your time and efforts.

This is a debugger that comes with Python standard library. This is the only advantage of it. Pdb has quite limited functionality. You can set a break point inserting:

Since Python 3.7 you can just use built-in function breakpoint(). There are commands that recognized by pdb when you enter them in during debugging session.

PyCharm is very powerful tool and one of the best IDE for Python. It has a rich debugging features. I’m not a PyCharm user and the reason why I don’t use it is the requirement to “live” inside the IDE. Yes, you can attach PyCharm debugger to remote python processes but it’s not always convenient.

This is my choice. The quote from the docs:

Its goal is to provide all the niceties of modern GUI-based debuggers in a more lightweight and keyboard-friendly package. PuDB allows you to debug code right where you write and test it–in a terminal.

A breakpoint is set the following way:

If you are using Python 3.7 or newer, you can specify PYTHONBREAKPOINT environment variable and built-in breakpoint() will call pudb:

It has two killer features. It’s a nice pseudo graphical UI and ability to switch to a custom shell during a debugging session. For example you can open an ipython shell by pressing !. It opens vast opportunities for code inspecting and examining your assumptions in the exactly same conditions where your code fails. Of course you move up and down through the stack, set new breakpoints and execute the code line by line and other standard debugging features. 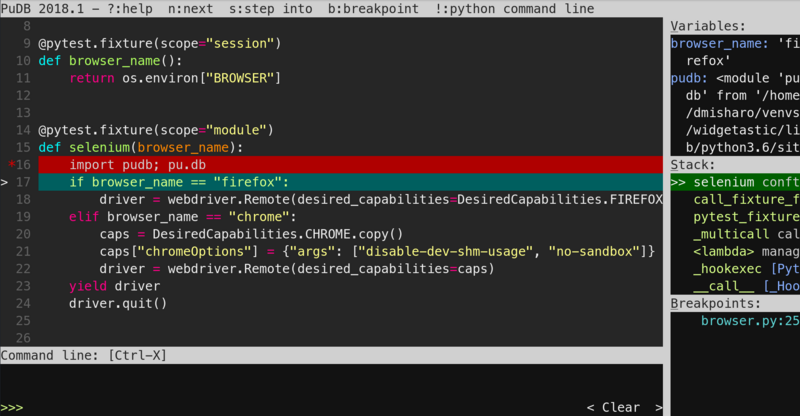 Pytest is one of my main testing frameworks and it’s very nice that pudb has integration with it. There is a pytest plugin pytest-pudb that can stop the execution post-mortem. Let’s say your test failed and you would like to find out a reason. So just install pytest-pudb package and append --pudb to pytest command:

I often use this plugin and find it very helpful.