I guess everybody knows Jenkins. It's one of the oldest and well-known automation system. It was developed in the times when there was no Docker, Kubernetes, cloud native and other buzzwords. I familiarized with it when I started to work at Red Hat. After a couple years of using I have some concerns I want to share.

User interface it's a first thing that you see in software with GUI. Jenkins has archaic, slow and unobvious user interface. If you have installed a bunch of plugins your settings page will become a mess. In modern browsers some forms are just broken: 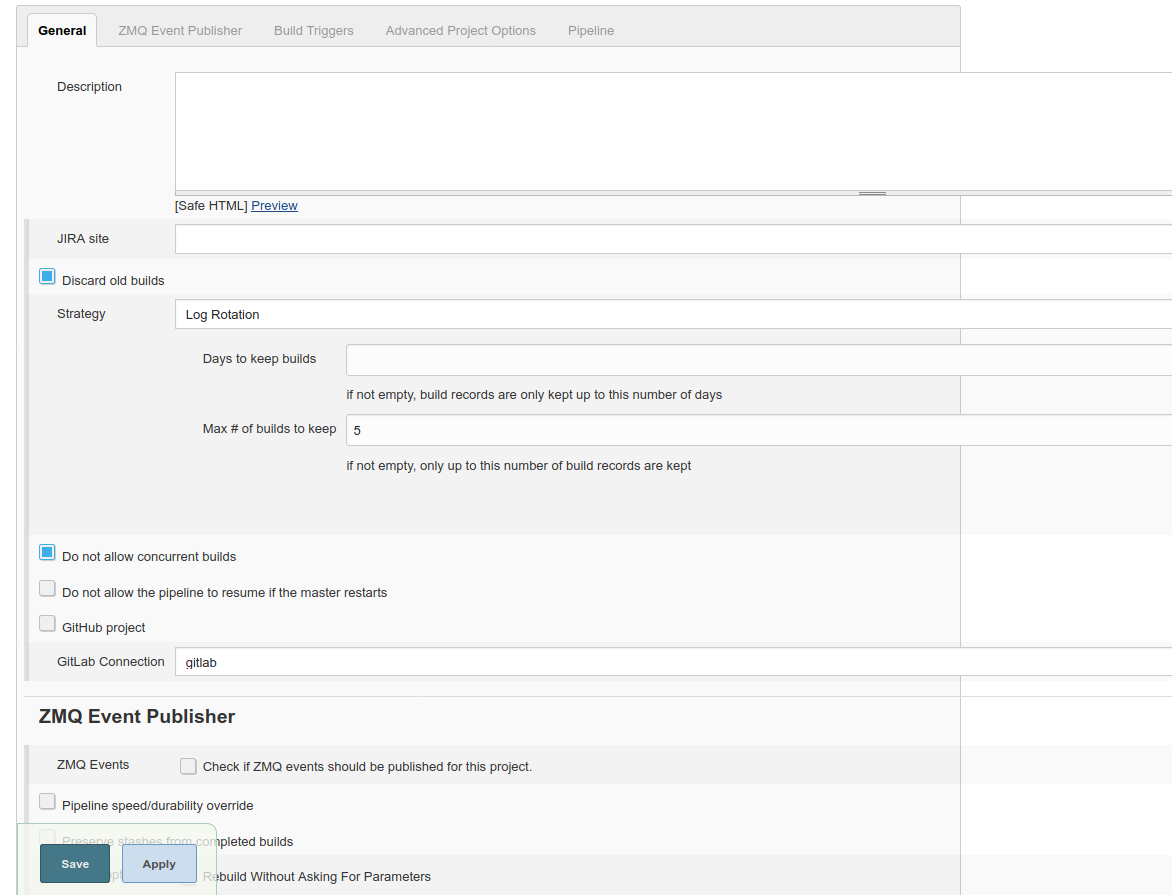 There is more modern UI from Jenkins developers called Blue Ocean. It looks much nicer but it doesn't have feature parity with the classic UI. So it can be used only for pipeline displaying.

Jenkins is distributed as one .war binary. It's supposed to be executed on some machine with java installed. If you have a lot of jobs and users you are in trouble. Jenkins cannot scale. You will end up spreading your jobs among several Jenkins instances.

This one is controversial. Pipelines can described via declarative syntax or jenkins job DSL which is built on top of Groovy.

In my opinion declarative syntax looses to yaml based pipelines. It tends to have deep nested structures which are hardly to read. Let's take an example from the official documentation:

You can see here is 4 nested parenthesis. Compare with possible Gitlab CI config:

This may be the most powerful feature of Jenkins. You can implement any logic in your pipelines. But in the end you will quickly discover that Groovy code which is executed somewhere in the Jenkins guts almost not possible to debug. Really the only thing you can do is just put println. Therefore take my advice do not try to implement any complex workflows. Make it as much simple as possible.

I think Jenkins has bad documentation. At least everything that relates to pipeline. Not all aspects covered in https://www.jenkins.io/doc/book/pipeline/ and often I need to search something in the Internet.

I'm convinced that Jenkins is in the end of its lifecycle. The industry have changed but Jenkins almost has not. Its plugin system extended its life but the retirement is coming. You can still use it for small projects but highly recommend to look at its competitors if you start a new project.